“Se wo were fi na wosankofa a yenkyi” It is not wrong to go back for that which you have forgotten. (Akan proverb)

I have always been intrigued and inspired by the Sankofa bird, a representation of the idea that we can look back to the past to help us create the future. However, we must be ready before we can look at the past without being overwhelmed by old emotions.

It has been quite some time since I wrote here. There are two reasons for that: I’m not doing much wandering these days, and the events that led to that have stung too much for me to write about them until now.

The lack of wandering is due to me being back in the US and not being employed full-time. Neither of those were part of my plans, and I have to admit I have been a bit unsettled.

It has now been almost exactly a year since I went from the highest point in my teaching career to the lowest.

In October 2020,  I declined 2021-2022 renewal of my contract from the international school at which I taught for 3 years. The international schools recruitment cycle is such that these decisions have to be made early. Due to my son’s experience at the school, I was extremely picky as far as the schools to which I applied in that recruitment cycle. This meant that I was facing stiff competition for a small pool of highly competitive schools, and by January I was feeling rather defeated by a string of final interview rounds that didn’t lead to job offers.

Then, things suddenly shifted from being ghosted by schools and dealing with constant anxiety to getting interest from two of the biggest names in the international schools circuit! I’m talking plentiful resources, $10K+ salary increase, stellar benefits, and the type of name recognition that would pretty much open every international teaching door I could imagine in the future. Not only were both schools interested, they were invested enough to compete in order to be the first one to offer me a contract. After 15+ years as a classroom teacher, I felt like I was being recognized as a high-value educator. In the end, one school prevailed, and I excitedly accepted a middle school English position with them.

As is the norm in this line of work, I soon began gathering paperwork from home and local authorities (that’s a whole other post right there), getting multiple pictures in highly specific formats taken, and scheduling doctors’ appointments. I was welcomed into the [insert school mascot] family and asked to send pictures and a little blurb about my son and I so my future colleagues could get to know me. I scheduled my son’s academic placement test and registered for summer professional development.

Then, in early March, as I was waiting in line for my second COVID test of the week, I received an email from the school director’s secretary casually asking if I was available for a chart with my hiring principal and the director in the following 5 to 10 days. Since I had recently confronted my son’s school about their less-than-best practices and their harmful effects on my son, and was aware that his principal had recently met with his future principal, I immediately felt a chill despite the friendly tone of the email. I followed up with my hiring principal, and he gave me the news: without ever contacting me, the elementary principal refused to admit my son, and so the contract was rescinded.

The fact that I went from being part of the “family” to mattering so little that, had I not emailed my hiring principal, they would have let my son sit for a 2-hour placement test knowing they had already rejected him speaks volume about their lack of integrity. So does the director not only being late to the Zoom call, but also never turning on his camera. Not to mention that the elementary principal who made the decision was not present and instead left my hiring principal to handle the awkward conversation.

In the end, I was left with no job, and it was too late in the recruitment season for me to look for another appropriate international school teaching post, which meant I had to return to the US.

While most things were uncertain, it was clear that I did not want to teach in my local schools again. Most of the factors that had prompted me to leave were still present, and frankly worsened by the pandemic.

Since my five-year plan involved gradually expanding my skill set to eventually transition into a new career, I decided to move these goals up. After looking at my work likes and dislikes as well as skills interests, I decided that a combination of part time freelance editing and full-time learning and development would be ideal.

I’m embarrassed to admit that I was very naive about the amount of time it would take me to make any inroads in either field, and I have had to deal with the emotional toll that comes with not yet succeeding.

Still, I woke up recently and rather than feel sadness and longing at the thought of my international life, I smiled. I still love wandering even if I’m not going anywhere far right now. So I’m looking forward to writing the Abidjan stories I haven’t told yet. And since my son is doing well here (which tells me we should stay put for a while), I’m committing to enjoying and writing about local wanderings, until I can wander far again.

As a single parent, much of my life revolves around Big Foot. Add the fact that I am a teacher, and much of my life ends up being about other people. However, I have finally learned that I cannot be good for anyone if I do not practice self-care, and therefore I am being intentional about nurturing myself as a person.

Writing is one of my most consistent passions, but it often takes a backseat to the responsibilities that come with the different hats I wear. I steal moments late after Big Foot goes to sleep, or early before he wakes up if I am not too exhausted, because I feel guilty spending time on myself while he is awake. On more days than I care to admit, I am so emotionally and intellectually drained from teaching that I can’t find the energy to pick up a pencil or open my laptop.

This year, however, I found the perfect compromise: The Kenyon Review’s Writers Workshop for Teachers. To make things better, the workshop was held in Ohio (where I’d never been), which meant a week away to focus on my writing in a new setting. So I silenced my self-critic, and went.

The security check at MCO was only mildly unpleasant: big crowd herded along by obviously disgruntled TSA employees, which is better than my usual experience there. There are no direct flights from Orlando International Airport (MCO) to Columbus Airport, so I had to stop in Philadelphia. My flight from Orlando was on time, and surprisingly reached its destination about 10 minutes early… which would have been great if my flight hadn’t been about 45 minutes late. Thank goodness I really like PHL.

The workshop itself was amazing. First, the (really) small village of Kenyon, Ohio is just the right setting for writing. The buildings are quaint, and the campus is seamlessly blended with the village. Additionally, T-Mobile does not seem to operate there, so I had no cell signal whatsoever. This had two advantages: One, my usual phone-based distractions were completely absent. Two, I was able to experience the kindness of my classmates, as people whom I had not known until our arrival on campus were quick to offer up use of their own phones so I could call my son and wish him good night each evening. 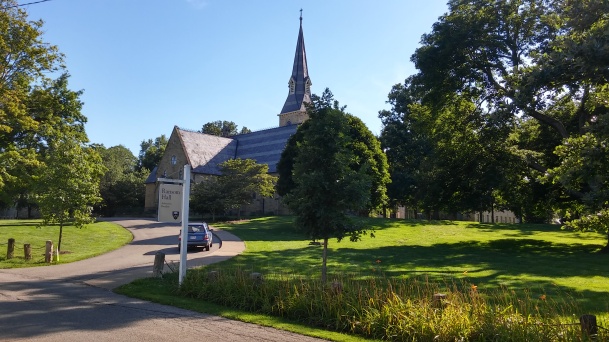 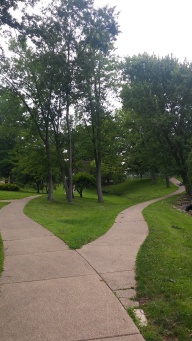 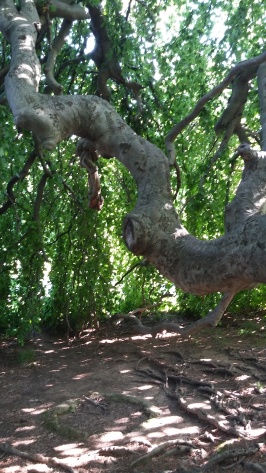 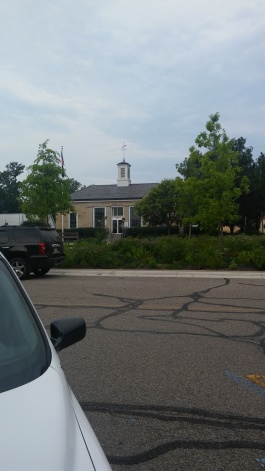 In addition to the inspiring architecture, there is an abundance of trees and grassy areas as well as many spots inviting people to stop, reflect, and (in my case) write. From benches under trees to large branches in a tree, the campus was like a playground for artists.

Beyond the setting, the classes themselves were amazing. The teachers were obviously experts, both in writing and in teaching. The other participants in the group also challenged and inspired me in ways that are not accessible to me in my everyday life. I was exposed to writers I had not yet read and was able to have literary conversations with people who actually enjoy such things. Then, after I had been filled with artistic impetus, I had something that I am always missing: time to write, free of guilt. The meals shared with other writers (from my program and the other concurrent sessions) and the nightly readings by instructors and participants rounded up the experience perfectly. When time came for us to depart, I wished I could have just a few more days.

The flight back was pretty awful. It was about 20 minutes late, which was not that bad, particularly since I was able to wait with one of the friends I met at the workshop. However, we then spent about an hour on the tarmac, meaning that my perfect hour-long layover turned into having to be rescheduled on a later flight.

Still, overall the trip was well worth it. I had time to myself and time to work on my writing in a setting that allowed me to be interact with other adult who share my passion for writing, generate more new material than I have in a long time, receive professional feedback, and discover writing strengths I didn’t know I possessed. I came home physically, artistically, and mentally refreshed, which allows me to be a happier (hence better) mom.